Situated on spectacular Cape Breton Island sits Thyme for Ewe Farm, owned and operated by Tim and Estelle Levangie along with their three young sons, Elliot, Victor and Theo. Born and raised in East Bay, Cape Breton, Tim met Estelle while studying at Nova Scotia Agricultural College (now Dalhousie Agricultural Campus) in 2007, Estelle on the other hand was raised on a dairy farm in the Northern part of France.

After leaving the Agricultural College the couple dated long distance for awhile until Tim moved to France for a year to be with Estelle – and in 2009 she immigrated to Nova Scotia.

“I have a Masters in Agriculture and have always wanted to own my own farm,” Estelle explained. “After trying to find work in Cape Breton unsuccessfully – we decided to take the plunge.”

In 2010 they purchased a run-down nursery business and began their dream of owning their own farm.

“It took a lot of elbow grease to clean up the place, and it’s still a work in progress,” Tim added.

This will be their first year participating in Open Farm Day!

“We want to help make people more aware about where their food comes from, and let them know that it’s important to support local businesses,” they agreed. “We also want to show people what it takes to grow and raise food.”

Visitors will be given a tour of the farm and get to check out the garden as well as have the chance to pet some goats and pigs, and see where the animals live.

Did you know: most people are unaware that you can grow ginger in Canada – and most don’t know what it looks like!

Thyme for Ewe Farm can’t wait to meet ewe on the farm! 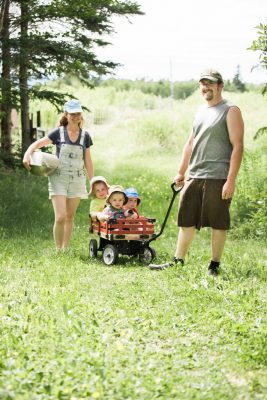 Roots run deep on many farms and for many farm families. Spurr Brothers Farms was started in 1875 and the 5th farming generation reflects on the past and plans for the future: www.saltwire.com/lifestyles/local-lifestyles/melvern-square-farm-spurred-on-through-time-for-five.... #MeetYourNSFarmer #CdnAg ... See MoreSee Less

The story of Spurr Brothers Farms begins not long after the Great White North became a country. In 1875, a mere eight years after Canada was born, Shippy Spurr started farming on a 62-acre plot of lan...
View on Facebook
·Share

Meet Your Farmer shared a photo.

Join us on Canada's Ag Day to hear inspiring stories of why agriculture! Tuesday, February 11, 2020 at 7PM! You can register here: www.eventbrite.ca/e/canadas-ag-day-why-agriculture-tickets-89962844289Canada Ag Day is quickly approaching! Check out this Why Agriculture? Panel that will be taking place at Dalhousie Agricultural Campus! ... See MoreSee Less

Den Haan Greenhouses were featured in Saltscapes Magazine a few years ago but it's a wonderful article worth sharing again! This 8 acre greenhouse was started in 1951 and today produces millions of pounds of tomatoes and cucumbers each year. Check out their story! saltscapes.com/roots-folks/2509-growing-a-business.html #meetyournsfarmer ... See MoreSee Less

A great article from Saltscapes Magazine. It's all about community at Meadow Brook Meat Market. Margie Lamb talks about life on their farm and what it means to run a business in rural Nova Scotia. ... See MoreSee Less

It's a very blustery, wintery day in NS! Thank you to everyone who is out working in this weather today. It's not easy on days like this! #mynsfarmer ... See MoreSee Less